Is there a way to keep the multiple colors in my bitmap font instead of overwriting them in the script with a flat color? I'm using 5.1.1 Pro on MZ.

I have seen your coment so I decided to implement this feature into the plugin. Please download the new version 5.2.0!

Then, on the font configuration inside plugin parameters, you can set the text color and outline color to disable.

With this, the RPG Maker will not apply any color to your font, it will use it as you created.

Thanks for the feedback/suggestion! :D

I've just given it a try and it works great.

hello!
whenever i add this plugin to my project i keep getting this error
"Failed to execute 'drawImage' on 'CanvasRenderingContext2D': The image argument is a canvas element with a width or height of 0."

I never saw this one, so I guess I will need a little more information:

So you didn't create your own font, right? You are using the one from the sample project?

heya! here's the screenshot for the console tab and the plugin parameters

Yeah, thanks for that. I'm not seeing anything wrong...

I guess I will have to ask for you to build a test project replicating the error for me. So I can test this project, trigger the error and see what is going on.

Can you upload it somewhere and send it to me via discord?

Great plugin! After some stumbling around (I think you should link the font setup tutorial in the itch page as well), I got it to work mostly flawless.

Still have some questions though: It looks like windows like MessageWindow don't detect the height of the bitmap font, so currently I have to change that in another plugin, could that be a feature? And does the PRO version's multiple fonts work like FontManager or do I have to use the two plugins together in some way?

What tutorial is that you are talking about? The plugin help file?

I'm not sure about the font height. If I record well, the free version does not support escape codes that changes the font size, so I believe it does not calculate a different font height properly.

I can't take a look at this now because I'm busy with the IGMC.

With "setup tutorial" I meant posts #16 and #18 on your RPGMakerWeb forum thread. I was admittedly a bit lost with just the help section in the plugin file, I think it could use better wording or just link to another page with images.

Past that, it works very well! Until I get my budget sorted I'll make it do with only one font, but it's certainly a plugin I'd recommend.

All of luck to you on IGMC Rebirth!

Thanks for the feedback! I will try to improve this whenever I got time. I think a video tutorial would also be nice to help understand the plugin setup.

Anyone using VisuStella Core Engine 0, you have it if you're using any of their plugins, it's at the top.

You need to go into the plugin settings for Core Engine, change Quality of Life Settings, then scroll down to the bottom to change "Font Width Fix" to "false" and it'll fix the dialogue from jumbling up.

Thank you so much for that info, I will put this on the help file and here on itch io! :D

Of course! Big fan of your plugins, keep up the great work.

Hello sir, can I ask you something?
I can even use Japanese fonts and some other language in rpg maker? Or it's only English?

On RPG Maker you can use any font you want by default.

What this plugin does, is let you use a font that works like a sprite sheet. Basically, inside the code, the plugin will map your font like this:

When you press A it will draw the bitmap(image) that corresponds to the letter "A" in your sprite sheet. I never tested Japanese, but the plugin has a free version that you can test. I don't see a reason for it not working, but I don't know how the Japanese alphabet works. So is better if you test on the free version first.

What about the pictures that I saw menu (Mr. Raze, Pig and Carta)? What language did you use it?

I'm not sure if I understand you correctly. What does the picture have to do with the game language? Are you mean the language that I use to write the picture file names?

Yes; Because I will use these language in my project:
1) English
2) Japanese
3) France
4)

See the red, what language is it?

I need to add in my project. 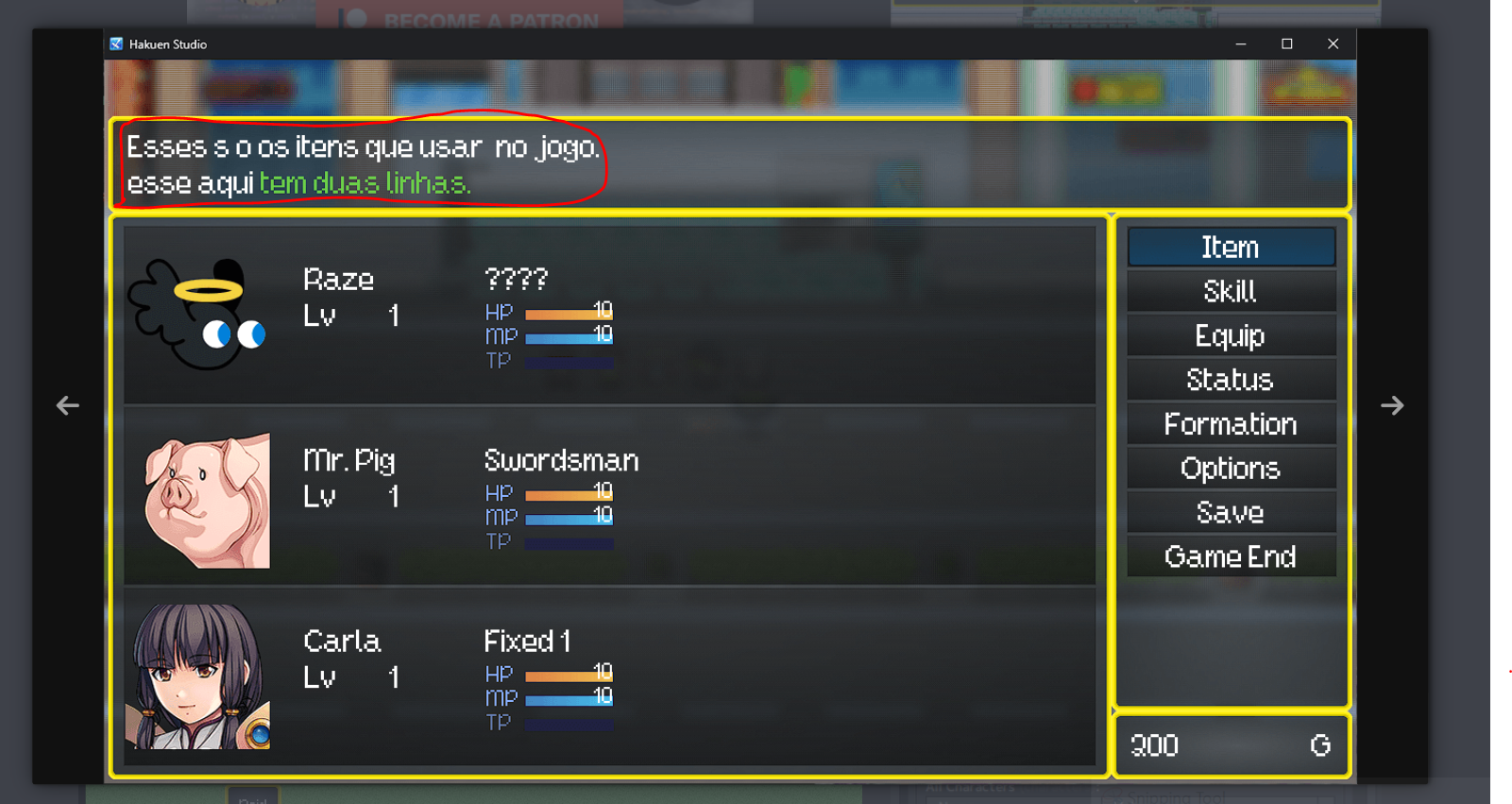 That is Portuguese from Brazil. It is like I said before, I believe you could use any language you want.

But that plugin is not a language manager, is kinda a Font Manager. Regarding of this plugin there is a free version that you can test and see if it will work for your purposes.

Unfortunately I cannot get any fonts to show up properly outside of your demo. Even when I created a 100% new project and only added the Book plugin plus this one the text appears incorrectly. I'm totally stumped as to why it's working in the demo other than it using an old version of the plugin. Any ideas? 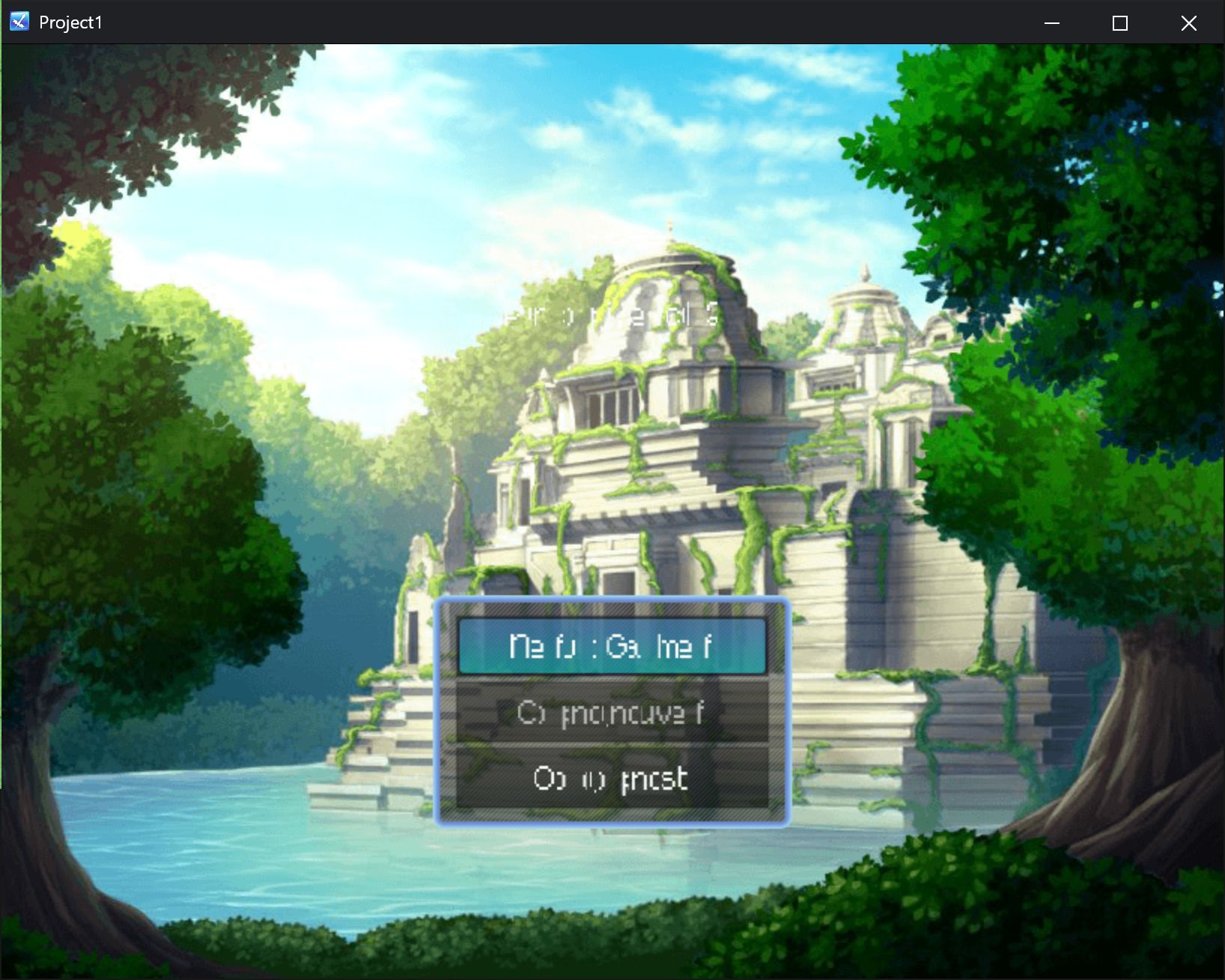 Can you send me a sample project with your settings? Your font file, etc?

Then I can take a look and figure out why it is not working.

Thank you for reaching out! While I was able to get the font used in your demo to work everywhere, I still cannot get my own font to work. The issue was that the letters.txt file from the demo had an extra character (specifically @) on the end which your default set of Symbol characters that gets auto-filled does not. After I added that it worked like a charm. I'm going to message you on Patreon for a non-public way to share the test project with my font.

Hi! Sorry to butt into the conversation, but has this issue been resolved? I have the pro version of the plugin and I'm having the same problem. I'm not sure how to set it up.

Yes, that problem was solved. It was a bad configuration of the bitmap.png file. Due to that, the plugin was not being able to properly calculate the width of each letter.

The problem was the following:

It does not matter their position inside the grid. But they must be inside it.

So if you open the PNG file(With an image editor like GIMP or PS) of the bitmap font I did on the sample project, you will see that it does have 97 letters, each of them has its own grid, which is 20 in width. And the PNG file's total width is 1940.

So the plugin was not being able to properly calculate the width of each letter, resulting in not managing to space them correctly on the texts.

An example was that the first letter of the PNG file was on a grid of 6,04 width, and that was messing up the calculations: 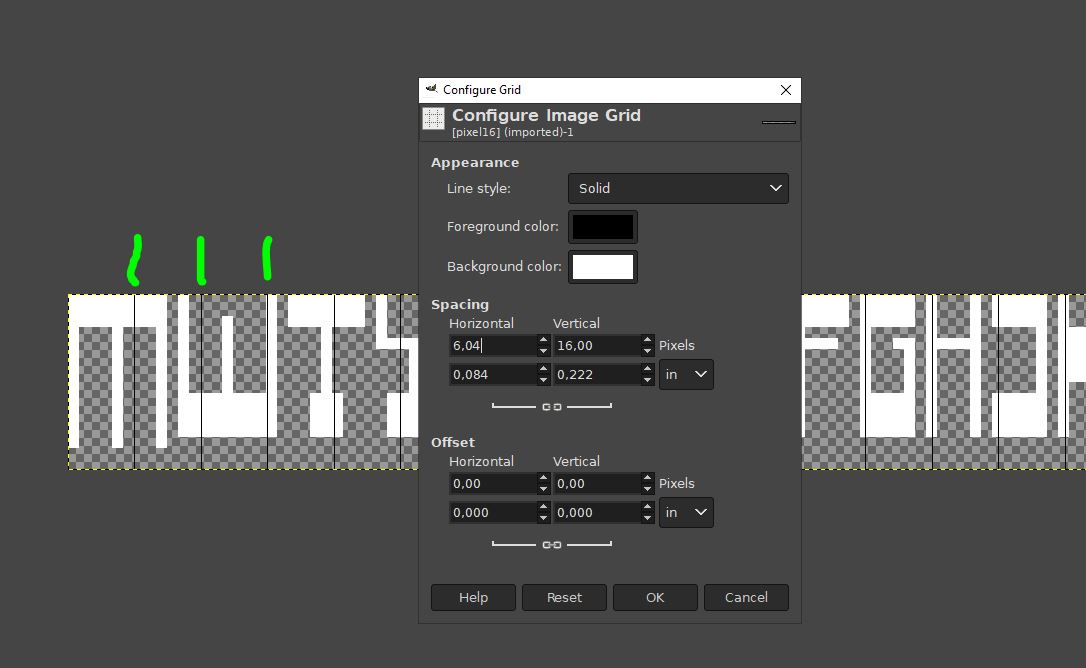 So you need to open your PNG file and adjust the letters to have their own grids.

How do you load the actual file? it's not showing up ingame (using Free MV version)

You just need to create your bitmap font file and attach it to a plugin parameter.

Can you show me a screenshot of your plugin parameters?

I didn't change anything apart from uploading my own png and changing the font file to it. Not sure how to actually load it ingame though. 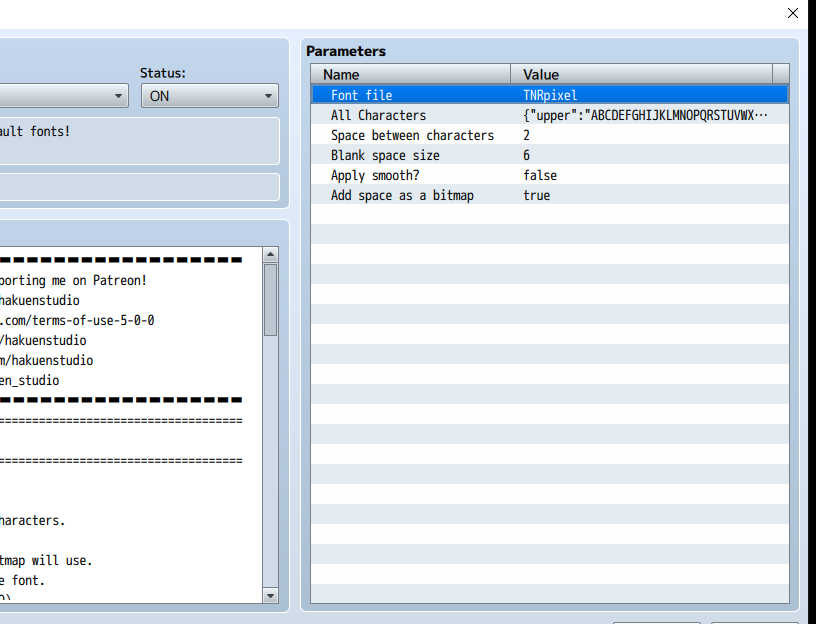 Your font file must have the same amount- and the same order- of characters listed on the plugin parameter "all characters".

So if you created a new PNG to be a bitmap font, it needs to follow that rule above.

You can take the default one that is on the sample project as an example of how to create your PNG(BITMAP) font file.

There's a way to change the font between message windows? For example, a character that uses another font when talks?

Hi there!
I could swear that I was already implemented this feature o.O
It's not hard to do! I will do it next week for sure, and let you know from here!
Thanks for the heads up ^^

Silly question, but how do you use this? I downloaded, added it to the plugin list, added the png file, added to all windows and scene, but it is not showing the file.  Please help

You really don't need to add it to all scenes and windows. You only need to do that, if you have multiple bitmaps and want to show a specific one into a scene or window. Otherwise, your game will take the the first bitmap font as default.

But for me to be able to help you more, I will need some screenshots of your plugin parameter. Can you send me that?

Are making a commission? Because I need a plugin for MV

Yes I can do it, but I believe after 05 august.

Feel free to talk to me on discord: Hakue Studio# 5661 or on any of my social medias.

Is the plugin compatible with Hud Maker?
Would interest me :D

I will test it and will answer you back! ^^

I just believe that you will not be able to set different bitmap fonts for each hud window. So it will use the first bitmap font of the plugin.

Not for now, but I will implement an escape code for you to be able to change the font inside the texts. 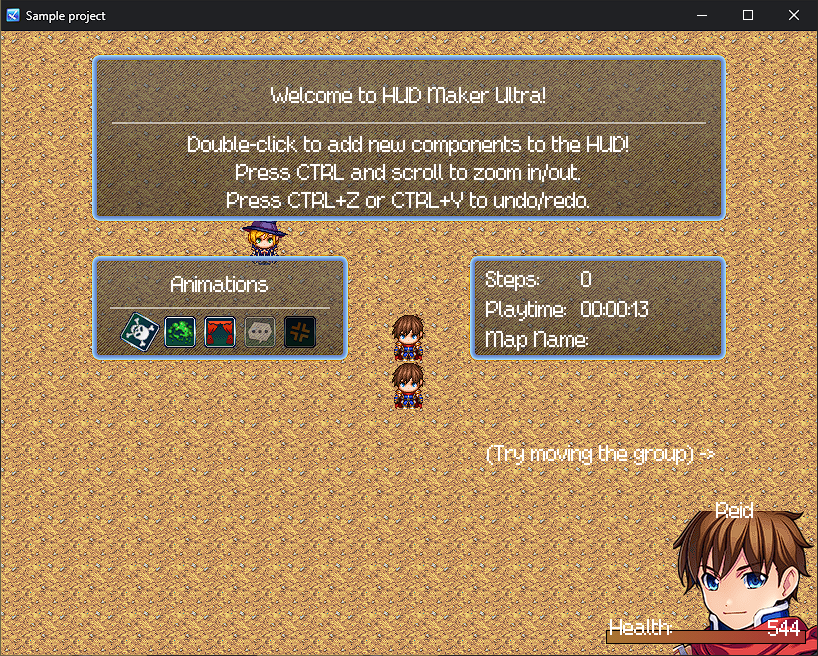